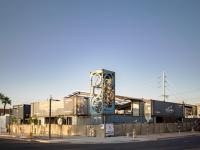 Artist Pete Deise has been working on a new sculpture over the last couple of weeks. While he is known for his sculptures, this new project has stretched the limits of his creativity and ingenuity- using a used shipping container to dominate a street corner in Phoenix, Arizona.

It all started when Pete was working on site in Cabo San Lucas Mexico and saw a shipping container turned on its side. He had an epiphany about creating a sculpture using a shipping container tipped up in that direction and the artistry began to flow from there. His wanted to make an avant-garde creation by cutting designs into the container while leaving pieces attached to the structure .

Deise used a 20 foot cargo-worthy container placed vertically on top of a 20 foot horizontal container to give it extra height. Almost as impressive as the magnitude of this project was that it was completed in just 11 days. By a small team that provided tools like the plasma cutter used to cut Deise’s designs, and the lift that carried him to the taller parts of the piece. As impressive as the view is during the daylight, the sculpture is just as captivating at night where it uses shifting colors of LED lights. It was revealed on Friday May 4th at the corner of First and Garfield streets during the city’s first Art Walk.