Shipping containers in Las Vegas?  Who knew anything about them…  I sure didn’t…  But, of course I’ve always got my nose in the shipping container projects, and  news.  And yes…  If there is a magazine about model trains, and dentistry, there is bound to be plenty of news about shipping and cargo containers and what goes on with them around the world.   I read as much as time permits on a daily basis, but today one particular article caught my eye.  It was titled Downtown Container Project Wins Council Ok.  I immediately clicked it to find one of the most wonderful pieces of news I’ve gotten this week (I may be slightly exaggerating, but still –  I was happy.)  Of course, lately everything is completely eclipsed by the nationwide reality TV show that is our election, along with the debates and the likes, it makes local and less “popular” news fall through the cracks at times.  This particular article however, ended up being quite interesting to me, and quite a few people in our circle.

I’ve talked about Shipping Container Housing before, but anyone involved in the container industry knows that laws, whether they be on a city, county, or state level often times aren’t exactly “clear” when it comes to owning containers and having them on your property.  On the flip-side, there are laws that are incredibly clear and more or less state “shipping containers are a blight”, or “a public nuisance” (we’ve heard that one personally) and will not be allowed in our town/county/state” under most circumstances, without paying an exorbitant amount of money, or unless someone behind a desk says so.  Apparently Las Vegas was no different.  So what is new with shipping containers in Las Vegas?  I know this probably isn’t a question that anyone asks regularly, but someone must have been asking, and today I also find myself wondering what is going on with shipping containers in Las Vegas.

“Container Park” which is proposed to be a project at Fremont and Seventh St. would use shipping container structures to create a modernized 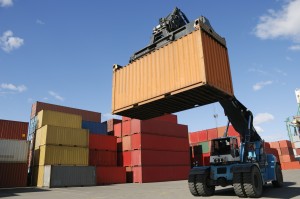 development that would be aimed at bringing commerce and foot traffic back to an area of town that seems to be falling about the wayside.  Imagine a row, or rows of smaller,  unique looking shops, storefronts and even restaurants grouped together in one area, all surrounding a large children’s park that would include a climbing wall, sandbox, water features, and even a theater resembling a planetarium.  All of this finished off with a sculpture of a praying mantis rumored to shoot fire.  (This sculpture was reportedly used at the burning man festival in Northern Nevada.)  So lets see…  Sand, toys, climbing, fake stars, and a giant fire shooting mantis!?  And that’s just for the kids! Whether or not you think any of these things sound appealing, there is another way to look at it.  On one hand, you have stacks of multicolored containers sitting in yards, ports, and along railways, rusting and taking up space, performing almost no service to anyone, while on the other, you have an abundance of an affordable, multi-purpose resource being transformed, and used for a plethora of different purposes that benefit everyone from homeowners, small, and big business owners, and now even children and their parents looking for a place to play, relax and maybe purchase some schwag from a local business or two.  There is no denying on any level that this idea, if used correctly, in an appropriate place is a is a great step forward in the conservation of our nation’s precious resources, and another way to take something hideous and make it beautiful. 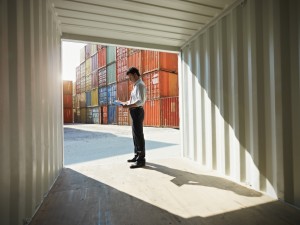 Ok..  So by this point you’ve got to be asking yourself, just how great can a bunch of old sea-cans look plopped down and stacked up in the middle of a city?  I have to tell you from first hand experience –  You would definitely be surprised.  Let’s take a few minutes to go over some of the container construction feats that I happen to know of.  First of all, I have to mention the TinCanCabin, and if you’ve been reading any of my previous blogs, you know I sort of have a “cabin crush” on this particular feat of construction, and while it’s not the epitome of modern looks, or groundbreaking architecturally, it’s just sexy in it’s simplicity, and proves that someone can make a livable structure with some planning, effort, and a few shipping containers  (Purchased from Cherokee West Enterprises of course — Get your free quote here) Mnn.com provides some pictures of some other outstanding container structures, but if you wanted to strictly talk about businesses,  you could build a coffee shop (yes that’s a Starbucks  –  Photo courtesy of blogs.smithsonian.com) toy stores, (photo from Jessica Armbruster’s blog @ blog.citypages.com) clothing stores, (photo from www.architechture-view.com) and many, many more.  The fact is, I could go on for pages, and pages about the different possibilities, but I’ve got a word count to keep, and let’s face it — It’s like going through someone’s photo albums, there comes a point when enough, is enough. 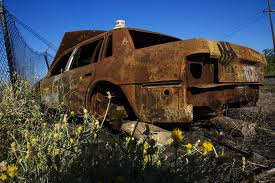 I know we all consider Las Vegas a different sort of city, but that fact remains, it is a city, and all cities and counties have regulations, all of which go through the same bureaucratic process, and yet somehow Las Vegas, of all places found this form of construction suitable for their city.  A city of lights and fountains, A city of beauty, and a city of wonder, a vacation spot for  hundreds of thousands of people every year.  Las Vegas is place with strict standards on aesthetics, so that begs the question  — How could a place that is like that pass a bill that the rest of the country seems to think is the equivalent of parking a rusted out Buick on the lawn of every house in the city.   What do they see that thousand of other cities don’t see that let them decide to allow a section of town to erect businesses housed in refurbished versions of what is said to be by many one the biggest blights of our nations ports and rail yards?  My answer is easy…  You can recycle just about anything with a little creativity and attention, a few buildings made from containers in Las Vegas could be one of the most unique, attention grabbing areas in the city.  I know if I saw it from a distance, I would definitely check it out.

At this point we have to ask one thing.  What makes this a good idea in one place, and a horrible idea in another?  There are literally thousands of unused containers littering our ports and rail-yards throughout the U.S. many have been sitting for years!  Is there a problem with allowing them to be made presentable, and converted into houses, businesses, apartment complexes, home storage units, wine cellars… Etc???  The point is, it’s time to make a change, and change starts small.  Whether it’s for the environment, to lower the ridiculous cost of housing, or to help a small business owner to make their own way, one thing could make a difference in all of these issues in one way or another is to simply allow the use of something that is abundant, and in surplus for many of these different reasons.  I said it before, and I’ll say it again  — Change starts small, and change on it’s smallest level begins with awareness, so let’s do our best to publicize this particular development in an attempt to bring the same laws to cities throughout the United States.  Shipping containers used as storage, housing, stores, restaurants, or even bomb shelters are an opportunity to conserve resources and recycle something that otherwise once used has very little purpose.  Change give you the opportunity to turn something ugly into something beautiful, or at least useful…. 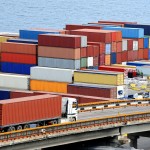 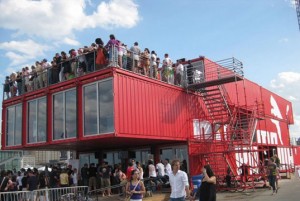